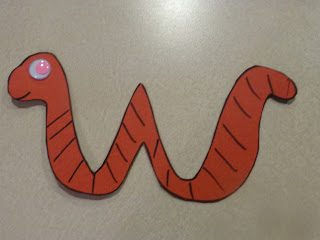 Cut a "W" from red paper (preferably hard cardstock but I just glued my construction paper to an old cereal box and then cut it out again), draw a worm's lines and face on it (I also used a googlie eye)

Lay worm on brown construction paper and lightly trace 2 lines where the bottom of the "W" hits the paper, then cut 2 small slits there large enough for the worm to sit down into

Draw a horizontal line across top of paper, denoting the grass line

Have child paint the area above the line green, let dry 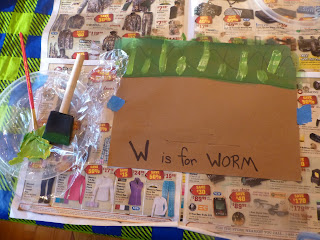 I then used some color mixing with him, to mix yellow and green to make a lighter green (or as he learned on Blue's Clues, it is called "chartreuse"...I swear I never would have taught him that but leave it to good old B.C. to fit in things I'd never even think of!)

Once the dark green had dried, he used a small brush to brush on "grass blades" of the lighter shade, let that dry

Once the paint is dry, have child use child scissors to cut grass into strips for "blades" (with some guidance so they cut into straight lines) and the paint will naturally make the paper curly but you can bend the blades if you want to make it "grassier" 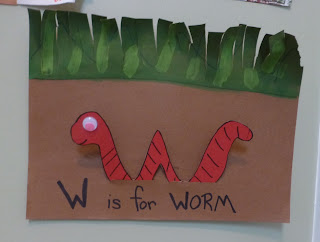 Then we watched Bill Nye's episode about invertebrates - animals without a backbone, like worms

To illustrate this, Bill Nye showed an octopus pushing itself through a tube, so we did our own "experiment" using a toy lion and a scarf (the scarf being the "octopus" and the lion being the vertebrate) - The one with bones couldn't fit but the one without bones could squish down to fit through the tube 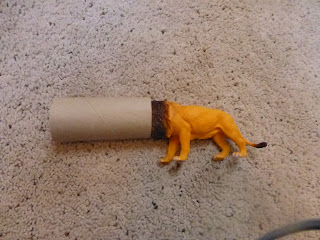 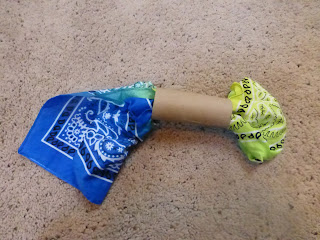 This led to us talking about exoskeletons, which invertebrates like insects have, that are hard, and therefore a bug or crab couldn't fit through a tube unless it was small enough since they are hard, but just on the outside, unlike a worm or octopus.

Then we got out all of his plastic bug figures since bugs are all invertebrates and he played with bugs until time to go to preschool
Posted by Happy Halfway Homeschooler at 7:11 AM